It is easy to grow your own potatoes in a covered raised bed from GrowCamp.

The hardest part is actually getting grabs potatoes early enough. Most garden centers do not get them on the shelves until well into the month of February. And we want to start sprouting already in late January or early February.

The reason why you can start so early is that the GrowCamp is covered with window foil and can therefore be used as a greenhouse.

It quickly gets hot in the bed as soon as the sun shines just a few hours. Then the soil is warmed up, and for many years you can lay the sprouted potatoes already in the middle of March.

The risk is, of course, that there may be persistent frost. The potatoes do not tolerate it.

They also do not like night frost, but you can do this by putting fibertex or something else that can form a protective extra layer inside the bed. You can also put a few block candles on the ground in the GrowCamp at night - it usually does not take much.

Below you can see how potato plants are nicely protected in a violent hailstorm in April. 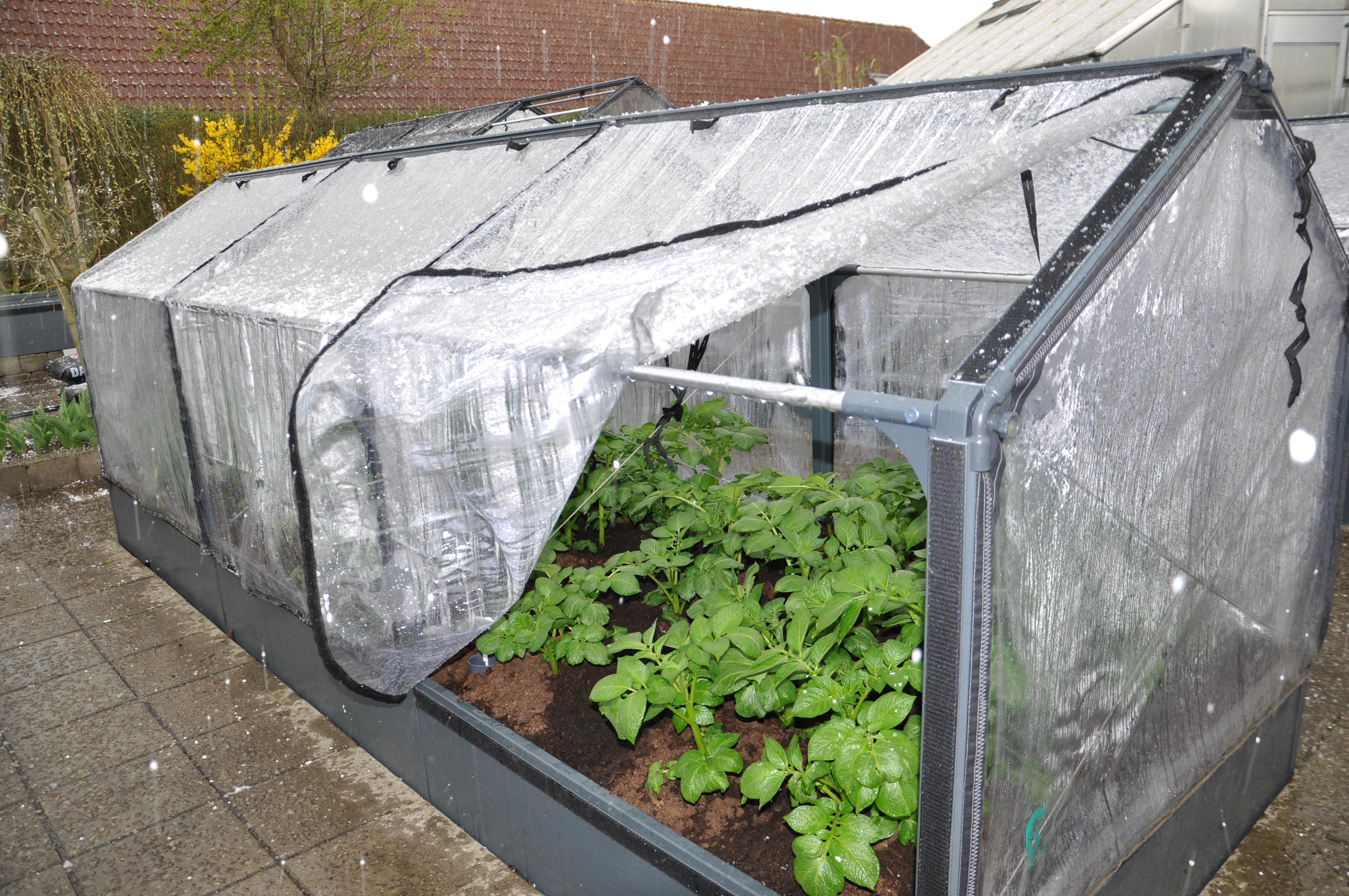 Put the potatoes in a box with low sides. There should be an inch of air between them so that they get light and air, and there is room for the sprouts. Lots of light is needed - and it must not be hotter than 12-15 degrees. With too little light and / or too much heat, the sprouts become long and weak. 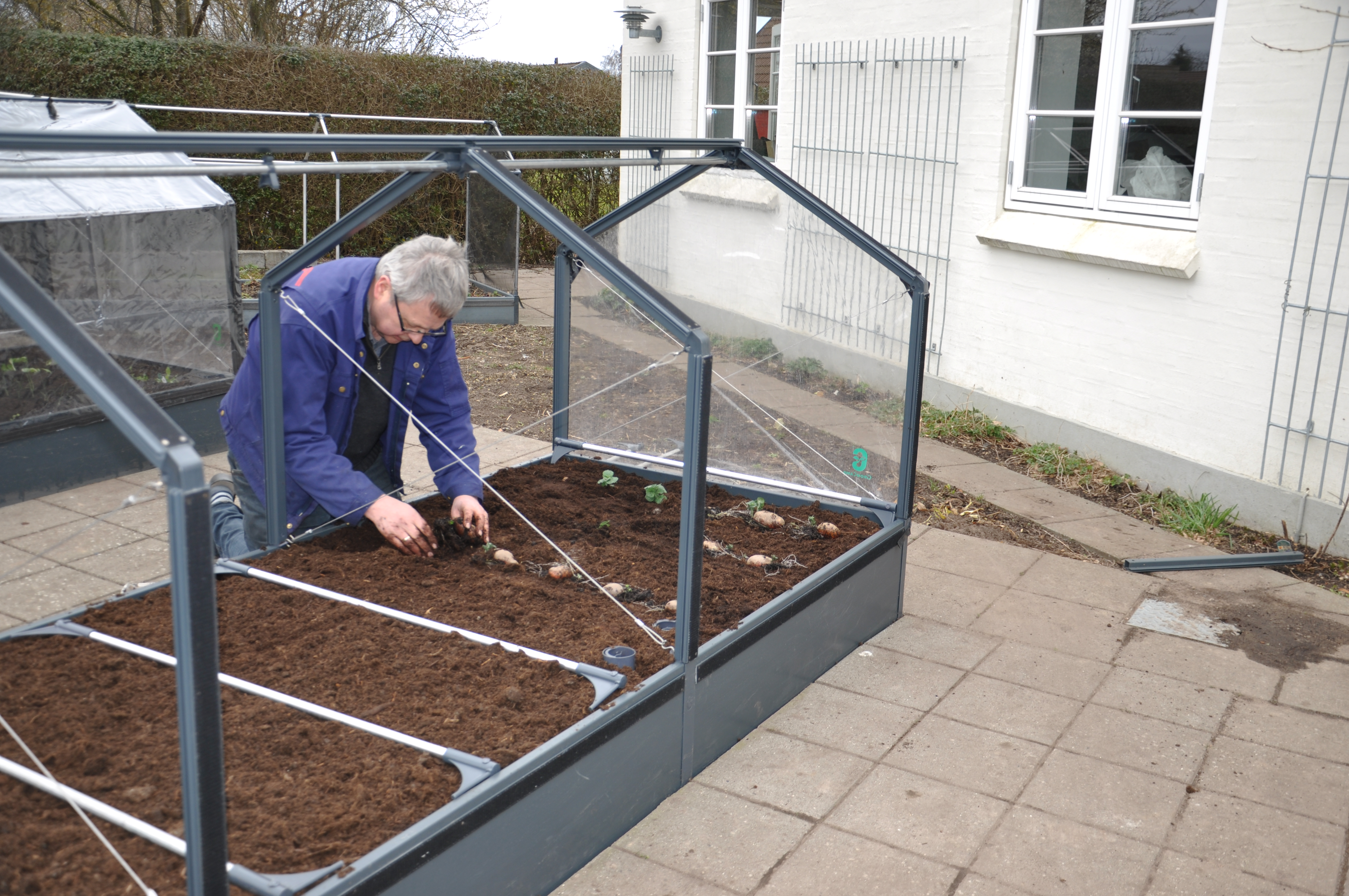 When you assess that there is no danger of frost during the day - at least not several days in a row, you can put the potatoes. It is a matter of temperament when one dares to start. If you are unlucky and it gets frosty for long periods, you have to add heat to the bed if the plants are to survive. As told in the introduction, you can keep night frost out with a few block candles into the bed and / or cover with fibertex.

The soil in the bed should be loose. If there is no fertilizer in, a little can be added. But not too much - no more than half of what you normally add to the kitchen garden. Otherwise you get too strong plants and too small potatoes. It is also not good if there is no fertilizer in the bed at all. But you can usually save it because you can see that the leaves are light green. Then you have to start with the fertilizer.

The GrowCamp should NOT be covered with insect nets. You take it off. The potatoes should have as much light as possible here in early spring. And there are no insects attacking potatoes. Of course, the window foil does not have to be removed.

The potatoes can be laid closer than is usually recommended. In each section of 120 x 120 cm there can be 15 potatoes: 3 rows with 5 potatoes. They are laid at a depth of 5-8 cm. Remember to turn the sprouts upwards.

As soon as the potatoes are peeked about 10 cm up the ground, you jump them. That is to say: this is not old-fashioned hype with chopping iron. You use your fingers or a small digging spoon. Carefully push the soil up in rows so that the potato plants are almost covered.

You repeat this exercise when the potatoes have grown 5-10 cm again.

In addition, make sure that the soil does not dry out. If it does, growth will stall and the whole process will be delayed.

With a GrowCamp superstructure, you have the opportunity to ventilate and make sure that there is the right temperature in the bed.

When the sun is shining during the day, it is easy to open a little or a lot of the window foil at the top so that it does not get too hot in the bed. And as soon as the weather gets warm and there is no danger of night frost anymore, you can take the foil off completely. The fact is that potatoes should not be too hot. Then the top gets too violent and takes all the energy from the potatoes. 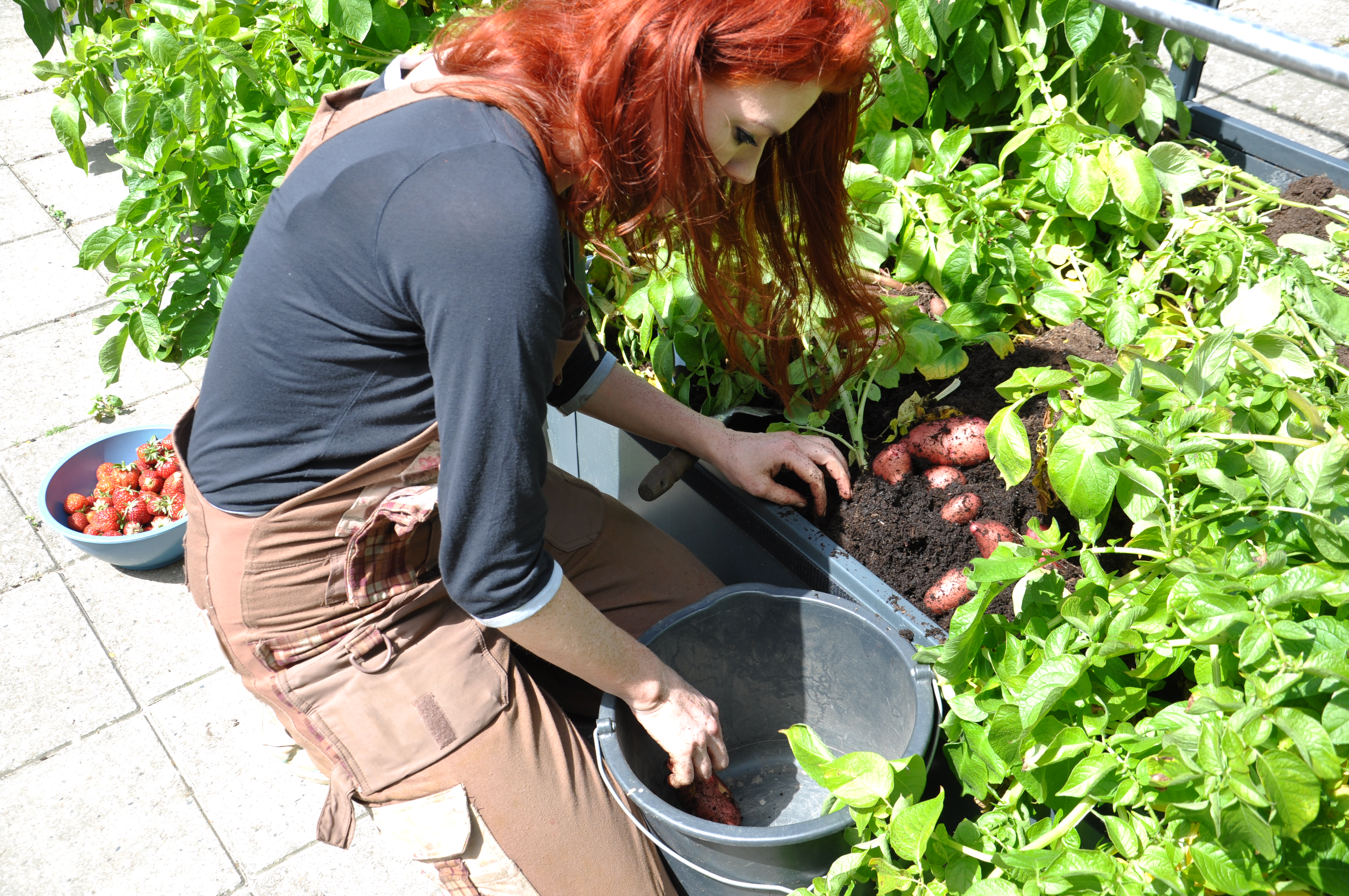 By the end of May, the first potatoes will usually be ready. Of course, it depends on the weather. Carefully insert one hand into the ground and feel for the size of the potatoes. It's about messing around as little as possible. If they are large enough, you can actually "pick" potatoes that way for the first few weeks. In this way, the potato plant will continue to develop potatoes continuously. 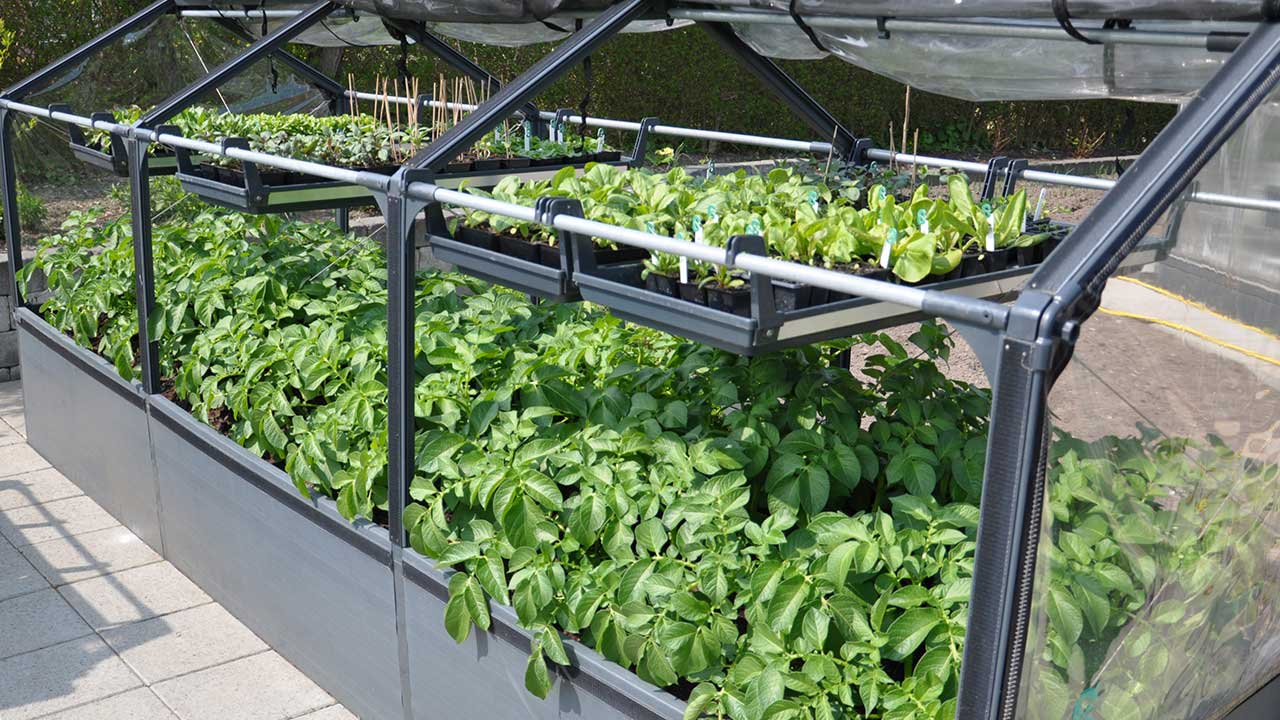 There is hardly any time of the year when one is more coveted as a dinner host than when one has new potatoes. So they usually get legs to walk on quickly.

Therefore, it is smart to have an extra floor in the bed where you can have new plants ready, as seen in the picture above. As soon as there is a hole in the ground after a harvested potato plant, there can be room for a new small plant: lettuce, chili, tomato, etc.

You can of course also SO plants after harvest: e.g. beans, peas and carrots, which can easily develop and be ready for harvest after the summer holidays. There are plenty of options. See e.g. the article “The year of the year with GrowCamp's covered raised beds” or read Peter Norris' fantastic garden calendar for self-sufficient people.

You can also get the superstructure separately and put it on your own beds if they measure 120 cm in width and have lengths of 240 or 360 cm. In addition, we offer canopy for 3 pallet frames. 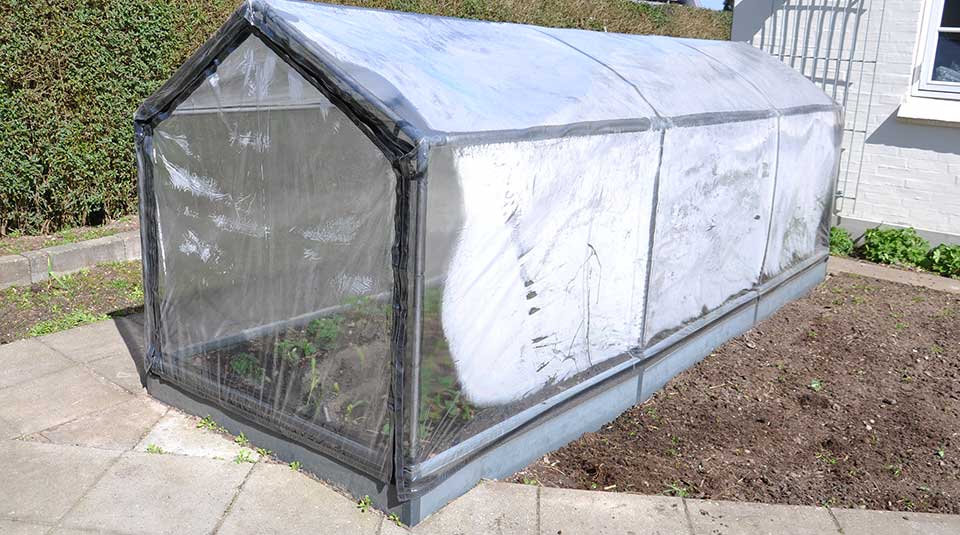