Do you want to hear the story of why GrowCamp came into the world?

The two founders of GrowCamp are what we call real garden lovers. Every time they get a chance to get in the garden, they’ll take it. They work hard in the garden year after year, arranging the soil, wounds, plants, water and tufts around the garden in general. However, they experienced time and time again that they did not get the dividend they wanted.

It could be due to pests, or that wind and weather had stopped the growth and left small whispers of vegetables. In other words, it was very far from the notions of the lush kitchen garden and to the reality, they experienced. Therefore, they made a decision to change it!

The founders got started with needle, thread, insect net and large pieces of window foil as well as some iron, which they bent to hangers. Then they set about constructing a covered bed that could spare their vegetables from pests, wind and other threats.

They tried it out in their vacation house, which is located in a place where there is heavy wind and rain. And their result was amazing! The homemade raised bed shielded both for the wind, rain and pests, which meant their vegetables were delicious. In addition, the cover had shielded from the wind and the heavy rain, which meant their vegetables were bigger and more juicy! They were in no doubt - this was perfect and a great idea. The prototype they made is now further developed and is now the GrowCamps you can buy from us.

When the first GrowCamp came on the market, it was the only one of its kind - and it won many awards for its innovative design. Many copies have been added since then.

The GrowCamp department consists of two female family members who handle the daily operation, customer handling, and packaging of the goods. They are ready to answer your question and pack your order.

We look forward to serving you.

2005 • The greenhouse tents were tested by friends and acquaintances

2008 • In the summer, the greenhouse tent was fully developed and put into production.

2009 • In the autumn, the founders won two awards at the Glee Garden Exhibition in England for the best invention.

2014 • After a hot summer, there was a great demand for automatic wateringsystem. It became the GrowWater self-irrigation system, which we patented.

2015 • The year we developed a tunnel for raised beds, which we today call GrowTunnel. The top section / tunnel is constructed with steel pipes, which provide a solid frame for the cover. GrowTunnel is especially suitable for growing cabbage, potatoes, carrots, strawberries and all other crops.

2016 • For those who want an alternative to PVC, we developed a raised bed in environmentally certified Siberian larch.

2017 • The year when germination really became part of the GrowCamp environment. It became possible to buy LED growth lights and various germination items, making it possible to extend the growing season.

2019 • The year when GrowCamp was taken over by Arne Kristensen. 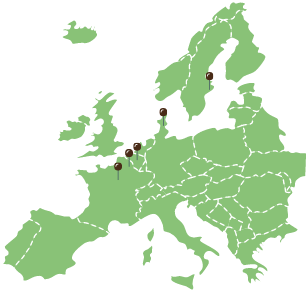 We pack and deliver for our dealers in Denmark, Belgium, Sweden and France.