Here in the bed of spinach and carrots, the spinach has long since been harvested. Due to the extremely hot weather throughout the month of May, the spinach started to bloom a lot earlier than usual, so the harvest period was quite short. However, it gained 1.5 kilos.

In the vacant space left by the spinach, winter leeks must now be planted. Actually, leeks should preferably be planted out during a period of cloudy weather, and preferably rain - the whole garden could benefit from this - but there is not exactly a prospect of this happening in the foreseeable future.

Therefore, one must take a bit of precautions so that the plants can still get well despite heat and drought. Some recommend spraying both the root and top of the small leeks before planting - I have never done that (and experience says that it does not make much difference), but in this case I have cut the tops down to about 20 cm, to the roots should not hold an overly large top juicy here in the heat. 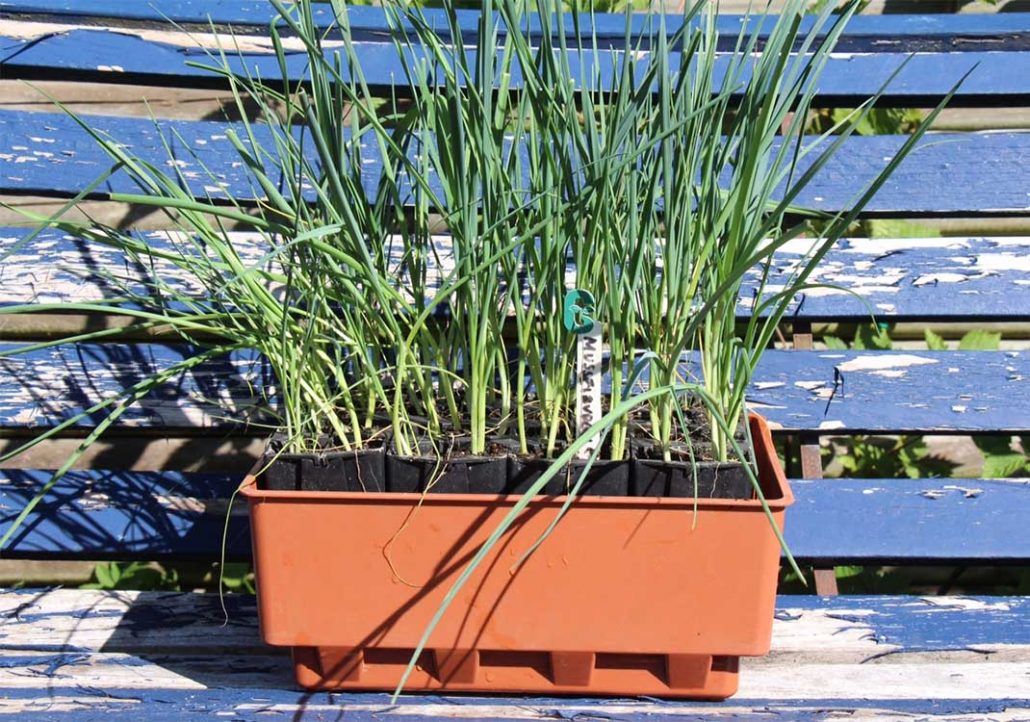 Holes have been inserted at a distance of 15 cm in the row. It is the same distance I usually use for the winter leeks, but this year it should be a bit interesting to see how the development is when 2 plants grow together in the hole. Some have had the experience that they thrive on cohesion and that the overall benefit is greater. After the leeks are set, water into the hole. It is not necessary to close the hole with soil - the watering means that soil is still rinsed down so that the roots are well covered with mud. And gradually the hole is closed by the rain and the growth of the leeks.

An old leek council says that leeks should only be planted out after Constitution Day to avoid the first generation of leek moths, whose larvae can wreak havoc in a leek bed. Here in the bed, it does not matter, as there is an insect net over it as protection against both leek moth and carrot fly - you beat two flies with a slap, so to speak. It is more important to wait with the planting until there is no longer a risk of night frost. Although the winter leeks as adults can withstand the worst cold (and then bloom the following spring), the small plants can not tolerate frost at all. It makes them think that it has already been winter, and then they might as well go into bloom right away. However, that risk must be said to be over for 2018.