The benefits of root trainers
One can pre-cultivate almost all kinds of vegetables in root trainers. However, they are particularly suitable for pre-cultivation of larger fast-growing plants with strong, deep roots, where there are many advantages to root trainers rather than pre-cultivation in pots. With the extra depth, there is more room for the roots to develop, and the vertical grooves in the cells force them to search downwards rather than twisting around the sides. The frame (or holder) that holds the cells is designed so that there is air underneath, and when the roots hit the hole in the bottom of the cell, the growth stops when they can not find soil to grow in - they are air-cut and instead of continuing to grow and run around in bottom as in a pot. This causes the plant to develop more roots and side roots from above, and thus the plant gets a much stronger root system.

How to sow in root trainers
Vegetables with large seeds and deep roots such as corn, peas and different kinds of beans get the best root development by being pre-cultivated in root trainers. This also applies to ornamental plants such as latyrus and sunflowers.

You start by putting all the cells in the frame/holder and then fill them completely with seed soil. You have to press a little more with a few fingers, so that the ground becomes more compact and cohesive without air holes, which is important when you need to water later. Then the cells are completely filled up again with the seed soil.

With corn, which is a greedy plant, one can fill a mixture of seed soil and compost at the bottom of the cells so that the plants have access to more nutrients as they grow. The seeds are laid on top of the ground, where with both peas and beans you can easily sow 2 seeds per. cell, which can then be transplanted without separating them. The seeds are then pressed down to the recommended depth, covered with loose sowing soil and watered with a spreader so that the soil is well moist. The lid is put on and the frame is set brightly without direct sunlight - if it gets too hot under the lid, it can give a poorer germination.

Irrigation
When the sprouts start to emerge, you can remove the lid and move the frame to a sunny window sill. A single disadvantage of root trainers is that water evaporates both from the surface and from the hole in the bottom of the cells, so you have to be a little more aware of the need for irrigation. Here it is best to water from below to prevent the soil surface from getting too wet so that the plants are attacked by root rot. This, in turn, can be done quite easily by turning the lid over, filling it halfway with water, and leaving the frame in the water for 5 minutes.

Planting
When you then plant out, you just need to make a hole in the cell and pour water into the hole so that the roots are enticed to search further down for water. The cells are opened like a book, the plant is placed in the hole and the soil is pressed around it.

Sowing of other seeds
Small seeds such as lettuce, leeks, onions or basil, where you rarely see a 100% germination, you can advantageously first sow in a plug box (FC4450) or a tray and later transplant them in a root trainer. Another option is to sow more seeds per cell and thin out to a single plant each place. Several vegetables can also be multi-sown with several seeds per cell, but without diluting later. The individual cells with maybe 3-5 plants in each are transplanted as a small clump, just with a larger distance between the clumps. This applies, for example for radishes, beets and onions.

It can be quite difficult to pre-cultivate root vegetables such as carrot, parsnip and parsley root in root trainers, although one might immediately think it would be obvious. If the roots are disturbed during the planting, it can result in them becoming rather branched and resembling small squid. If it is to succeed at all, it requires that you plant before the root reaches the bottom of the cell, and that the seed soil has been pressed well together in the cell so that it does not fall apart when you take the plant out of the root trainer to put it in the plant hole.

It is not really recommended to use root trainers for vegetables, which actually thrive best by being repotted several times into a slightly larger pot before being transplanted. This applies, for example. chili and pepper, tomato and celery. Plants such as courgettes and pumpkins that grow quickly in width are also best sown in single pots with a greater distance between the plants.

And although root trainers CAN be used to pre-cultivate almost any kind of vegetable, a pluggbox (our item number on this is: FC4450) or small pots may be a better choice for small plants that only need a pre-cultivation for a short time before planting, and therefore will not be able to utilize all the space and the expensive sowing-land in roottrainers at all.

What size root trainers to use
The choice between using COMPACT, SLIM or DEEP is not very complicated - the three types can all be used for most vegetables. However, they may each have some advantages:

Hereafter, it is rather a question of how many plants one needs to pre-cultivate at one time. In order to keep the cells neatly in place in the frame, it is necessary that it is completely filled in, if necessary also with empty cells. Therefore, it can be practical to have several sizes available that can fit the number of plants - and at the same time it can be space-saving so that empty cells do not fill the window sill unnecessarily. 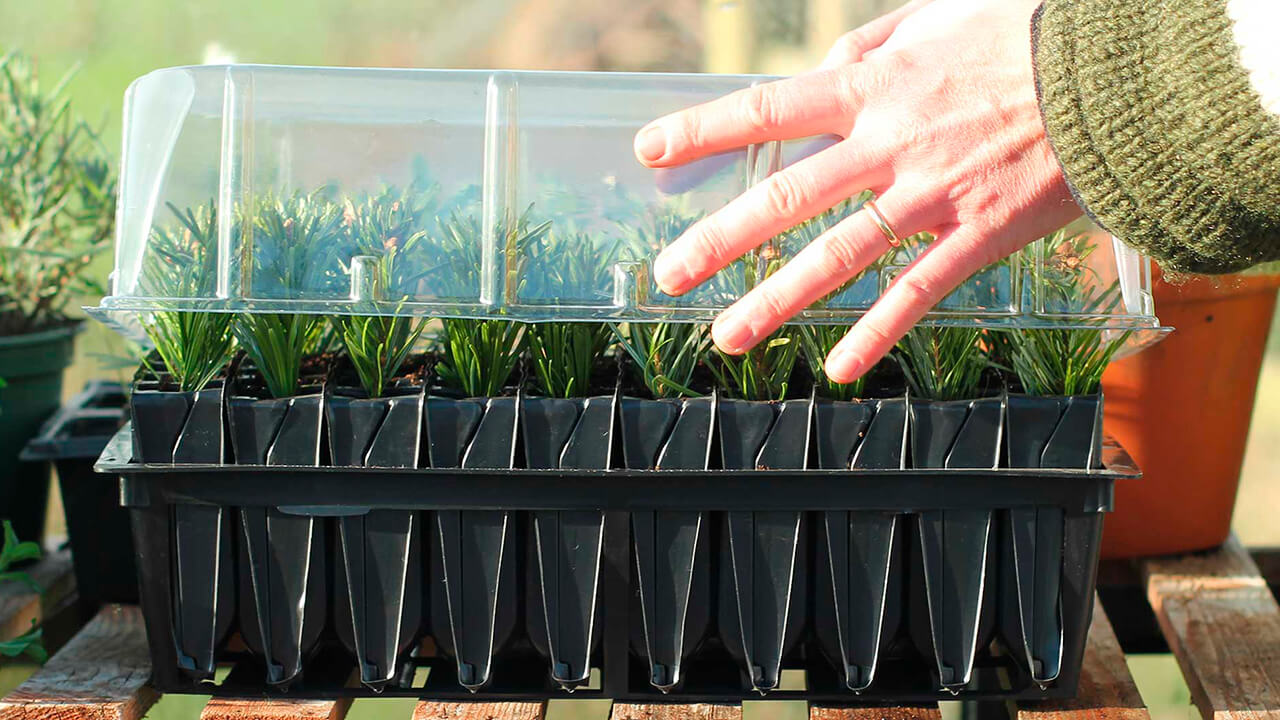