If you want an early harvest of fresh peas, you can pre-cultivate a team in the first half of March. The first peas are usually sown in the open at the beginning of April, but the emergence can be somewhat uncertain if it suddenly sets in with too much April-like frost and cold. The small sprouts must also be protected against pigeons, for example, which can completely destroy a newly sprouted pea bed in the early morning. By pre-cultivating the peas, you get several weeks earlier harvest, a safe germination and no discrepancies with the pigeons - the peas are only planted when they have a size that is no longer interesting as pigeon food.

You sow the peas in root trainers, with 2 seeds per room. When the first twigs begin to appear after a few weeks, it is time for planting before the pea plants become too intertwined. It is advantageous to plant in a double row across the bed with 20 cm and a pea fence between the rows. The root trainer cells (with 2 plants in each) are placed in the rows with 10-12 cm in between - and thus a single root trainer fits well to be able to make 2 double tractors. The rows can be covered at the beginning with plastic or non-woven fabric to provide some protection, but the plants can easily survive a bit of frost. When the root trainer has become available, you sow the next batch of peas - and in this way you can continue to sow and plant every 3 weeks until the beginning of July and thus be able to pick fresh peas from June to October. 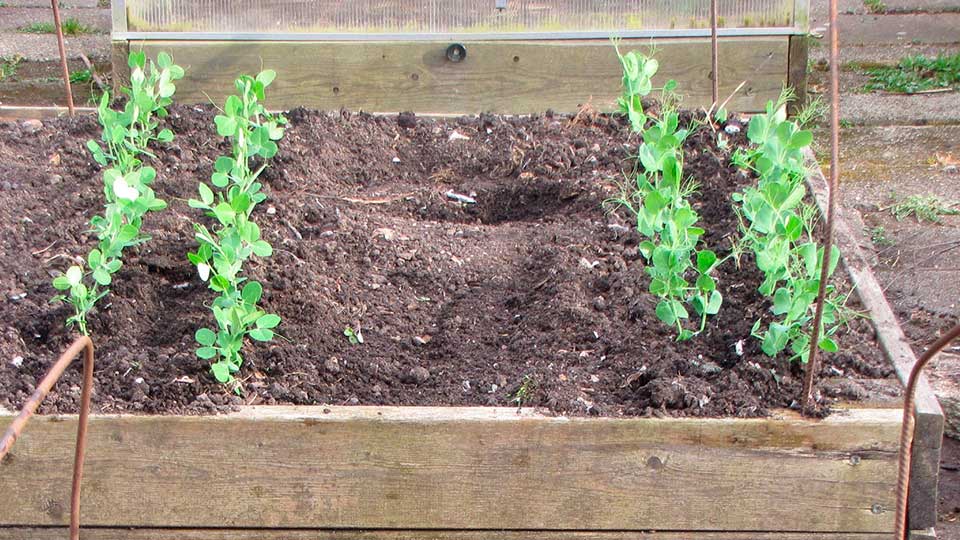 At the end of the month you can pre-cultivate pale celery, which can rarely be bought as seedlings. It is actually an easy crop to deal with as long as you can take a little loving care of the small plants for the first few months. They can not withstand frost at all, and just being exposed to temperatures below 13 ° for several days in a row can cause the plants to flower rather than develop thick stems. Therefore, they can rarely be left to fend for themselves in the open until sometime in late May, so they require some care for a few months. The temperature is kept at around 17 ° and the plants must never lack water - then they think again that "the end is near" and they can start to bloom. Celery leaves are obvious to pre-cultivate in root trainers where the plants have the opportunity to develop long strong roots. As I said, as the plants do not have to be planted out on the permanent site until the end of May, it will already have been possible to harvest spinach, lettuce or even new potatoes on the area.

Leeks, on the other hand, can normally be obtained as seedlings in May. However, it is rare for the variety name to be stated, nor is it always clear whether it is summer or winter leeks. Which is an important piece of information: winter leeks can withstand frost and snow all winter and still be fresh - summer leeks can not. Therefore, if you want to keep track of which varieties you grow, you can pre-cultivate them yourself from March. Winter leeks, which you may not want to plant as late as July after potatoes, for example, you can wait to sow until sometime in April. Regardless of the variety, the small plants do not tolerate frost at all, which makes them think that it has already been winter, which is why they start to bloom as leeks always do the second year of their lives.

Here it is easiest to pre-cultivate leeks in boxes, as the roots can be easily pulled apart when they need to be transplanted. Do not sow too close - an ordinary flamingo box of about 25 × 25 cm is suitable for about 100 seeds. If you want leeks with long white stems, it is important to have strong seedlings that are about 25 cm long. When the leeks are to be in the ground, you make a 20 deep hole with a stick, stuff the leek in the hole and water. Then a 5 cm small green top sticks up, the rest turns white - and you do not have to jump.